Step aside, Blue Man Group: Oliver Herring’s in the house. Or in the Chelsea’s Meulensteen gallery – where, it’s safe to say, he’s made himself feel very much at home.

When I first walked by, I assumed that the group of smoking, barefoot 20-somethings outside the gallery was Chelsea’s version of a Halloween outing.  Plus the inside of the gallery looked a bit of a mess and appeared to be under construction. So it wasn’t until I was headed back and saw a group of laughing tourists walking out that I ventured in. The camera clicks made me stop at the entrance: maybe the gallery was closed after all? But then I heard an enthusiastic voice shout, “Come in, come right here and stand there, yes, then you won’t get wet!” – and I stepped into Herring’s Areas for Action. 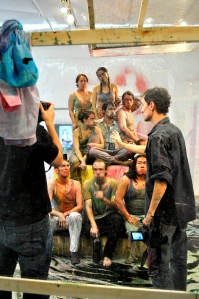 The “Halloween crew” turned out to be Herring’s models. And their costumes were simply clothes stained with multicolored liquid that they spewed out of their mouths in various directions according to Herring’s perpetually changing artistic visions. They took their sips, Herring yelled his commands, and then he and another photographer shot the action. Clearly, the artist was having a fantastic time, pouring out encouragement, laughing and directing with lightning speed. The models, too, seemed to be enjoying themselves – a pretty impressive achievement on Herring’s part because let’s face it: who wants to spend all day sipping Kool-Aid-like food dye and spitting on command? (One guy even volunteered to be the “guinea pig” who stood in front of the group and offered up his face and body to his colleagues for liquid coverage).

Herring positions his viewers behind a see-through screen that protects them from the projectile spitting – and lets them feel like part of the director’s crew. That’s a big part of his artistic credo: to make people feel at ease and to “harness the fluid and democratic nature of his practice” by designating “specific areas of the exhibition space as open for constant audience participation” (from official show press release). The audience is at first confused (everyone gets stuck at the door wondering if they’re intruding on a private filming), then sucked in, and soon they’re all laughing and frowning and snapping photos just like Herring himself.

I have to admit that after strolling through five or so less-than-friendly galleries on West 22nd, where the front desk people make it their job to avoid eye contact (with the exception of the initial once-over each walk-in is obliged to undergo) – Herring’s energy and openness were a welcome break. I’d have left the neighborhood in quite a different mood if he hadn’t been my last, light-hearted impression. It was silly and childish (and the kids loved it – that particular show was 100% G-rated) – but for what it was, performance that involves the viewer and allows incredibly easy interactiong with the artist, it was great fun.

On my way out, I told Herring that I wished I could stay all day (his reply: “I wish you would! Come back again, it’s different every day!”) and that this was the most fun to be had in Chelsea (his reply: “I love you!”). There are only three days left til the show closesk, but if you’re in the area, it’s worth stopping in. You might get lucky and see one of the performances that warranted this signage:

The Next Dinner Party

So raise your glass